On Sunday, Julie and I took a walk in two of our favorite parks: North Beach Park (you were surprised?) and Carkeek.

I wanted to go to North Beach to make some notes about the work done on Saturday, and to make some plans for the planting work parties (November 24! Save the date!)

While we were there, something started happening in a tree above us. We couldn’t see it, but we could sure hear it: A large murder of crows, cawing loudly and repeatedly. Julie thought they were mobbing a raptor sitting in the tree. As we watched, more crows joined every few seconds, and the cawing got louder and louder. Eventually there were so many crows that it became a chant, phasing in and out of unison. I felt like I was at the invention of song. We watched for several minutes, as the noise and chaos increased. It was still going when we finally turned away. Whatever was causing it, we’ll never know.

Carkeek — Puget Sound, rather — also had something in store for us. We went to look for salmon in Piper’s creek, missing them by about one day. On our way back up from the beach to the car, though, we noticed some people at the top of the bridge to the beach looking a lot more avid and engaged. We asked what they were looking for.

“Orcas are coming,” a woman told us. A man said that he had seen them off Alki, and that the J pod and K pod were swimming together. Hearing that news, we weren’t going anywhere. It didn’t matter how long it took. 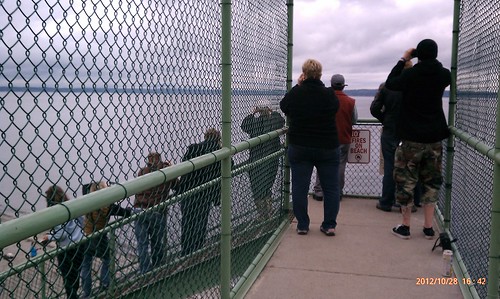 It did take some time for us to see the orcas, but it was worth it. Even though they were so far across the Sound that even with binoculars they were very tiny. But we could see their dorsal fins rising and falling above the water level. We saw breaches and tail flaps. Even at that distance, it felt so much more impressive and real than seeing a close-up on television.

But what I particularly liked was the loose community that developed. One woman had her phone out, and was passing on tweets from the Orca Network. Another woman, once we started seeing the whales, would comment on the behavior: “There’s a tail flap. There’s a breach.” If she hadn’t, we wouldn’t have known what was happening. There was some sharing of binoculars, and people constantly describing where they saw the orcas. We stood there at least an hour watching.

It was sharing the experience among ourselves that made this a uniquely urban experience. The way we came together, some people intentionally, some (like us) by accident, would never have happened anywhere else. On a whale watch cruise, we’d have been closer, but the community around the experience wouldn’t have felt as organic (mind you, if I have the opportunity, I’ll go on a whale watch cruise, now more than before). This was a pretty simple experience, after all, but with all the news about conflict and individualism and every man for himself, it was great to have.