We had a great work party on Saturday, 2/23. The weather was perfect, several people commented as they arrived that we had really lucked out. The predictions were for rainy and cold, we got dry and warm.

We had a visit from the Natural Area Crew, which gave us a good energy boost. 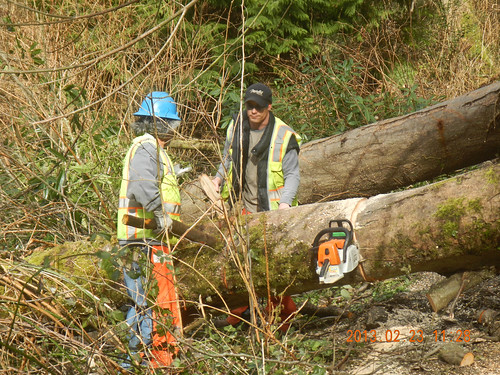 Theodor and Tod clean up some fallen alders.

Some alders had fallen across the trail several months ago, and this was the perfect job for them. The trees were so big, they had to send a guy out for larger chainsaws. But they took care of the job, which was a big help and a big relief to get it taken care of.

They also helped with cutting and “painting” some of the holly and laurel. If you cut either of these woody invasives, they just resprout. If you uproot anything larger than about 1″ diameter with a weed wrench, you leave chunks of root in the ground… which resprout into several trees, worsening the problem. So the only recourse is to cut and paint. 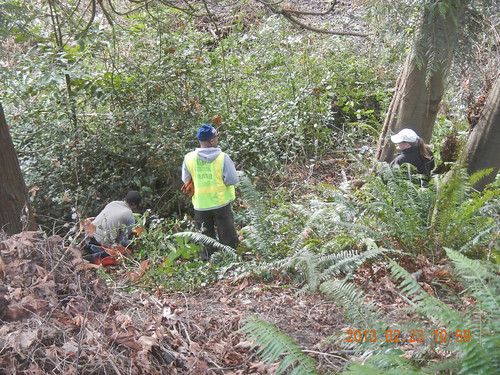 Tod (left) and Darryl (middle) cut down hollly and laurel, and hand it off to Julie (right).

But there were plenty of volunteers as well. Not counting the NAC, we had 20 people there, including four students from Ballard HS getting community service hours. We also had a good crew working on putting survival rings around trees deep in the park. This is the most physically demanding work we currently do, and involves careful clambering on a steep slope. Generally volunteers aren’t allowed to work on slopes steeper than 40 degrees, but we only send experienced workers and don’t do any heavy-duty invasive removal. This crew put rings around 15 trees, which is a pretty good count for about three hours of work.

We also did about two or three hundred feet of invasive removal, particularly star ivy. This breaks apart very easily, and yes, it resprouts, so we’ll probably be doing some more removal in the same spot for a little while. 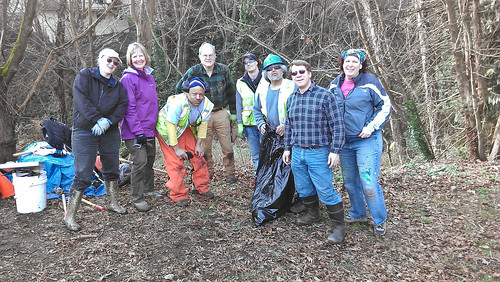 Here’s a picture of the remnants of the work party — a number of people had left by then. We had finished with cleaning up and putting away the tools and were just gabbing a little. But left to right in the picture is Julie, Drexie, Darryl (NAC), Morry, Tod (NAC), Theodor (NAC), Doug, and Sylvie.

Thank you to everyone who participated, it’s always fun and exhilarating work. There are a few more pictures from the work party on Flickr.