This was done for ESRM 473, “Restoration of North American Biomes,” Winter 2013, Kern Ewing, professor. I was in Group 5. 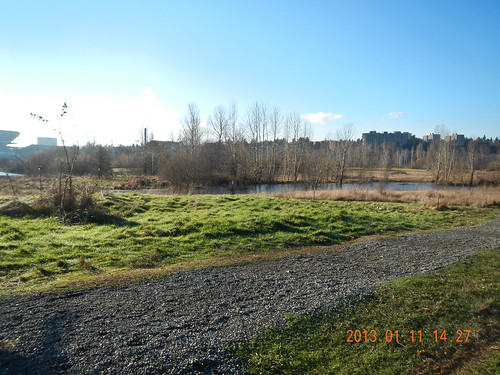 For well over a decade, the students taking ESRM 473 every winter have done restoration projects in the Union Bay Natural Area. They’ve mostly been creating Garry oak savannah, a habitat that was once common before European settlement, but has been almost wiped out by agriculture, fire suppression, and degradation of the land.

Garry Oak savannahs were maintained by Native Americans and used as open grazing lands for herbivores and gardening areas for families. After the glacial retreat, the weather was warm and dry, and the prairie developed and was used by the first peoples. When the climate cooled and got wetter, Native Americans had to maintain the open prairies to prevent encroachment with Douglas-fir and other conifers. The plants have adapted to the fire regime, and need frequent cool fires for germination and fertilization of the soil.

The Union Bay Natural Area was once underwater: before western Washington’s hydrology was so drastically revised by Hiram M. Chittenden, Lake Washington was about 19 feet deeper. After the Montlake Cut opened, and Lakes Washington and Union reached a common level, the area that’s now UBNA was exposed. It was used as a landfill for many decades, then capped and filled in the 1970s (I think). More recently, restoration efforts of various types have been done there, to do a better job of creating habitat and providing ecological services. So, in one sense, this wasn’t a “restoration” project at all, because there was never a Garry Oak savannah in this particular location. But in many other senses, it is. The savannah will provide much more food and habitat for the waterfowl and other birds that live in UBNA, and will just plain be more beautiful than the lawn it’s replacing. 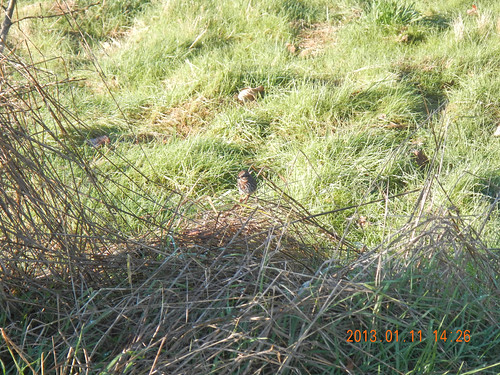 Each group got $150 to order plants and seeds. We selected food plants as much as possible, including things like nodding onion, camass, broad-petaled strawberry, and others. We also ordered all seeds, partly by accident. Each group also got a number of starts of idaho fescue and blue wild rye to supplement our selection. Finally, a large cache of seeds was discovered in the lab and was divided among the groups. This included more fescue and wild rye and some tufted hairgrass. 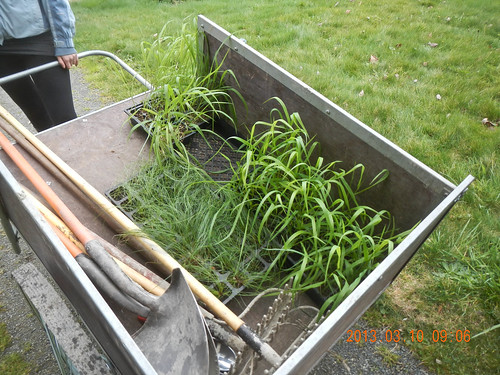 The blue wild rye (Elymus glaucus) is the taller, broader-leaved grass along the edge of the cart; idaho fescue is the smaller, more delicate grass next to the rakes.

Various delays put the work parties very late into the quarter, and late in the planting season. It took a while for the area to be plowed, and then when it was plowed, they uncovered some artifacts that lead the powers that be to decide to cap the plowed area with two feet of soil. Another delay, but helpful. Sunday, March 10, was the day that several groups were going to be working, throughout the day. 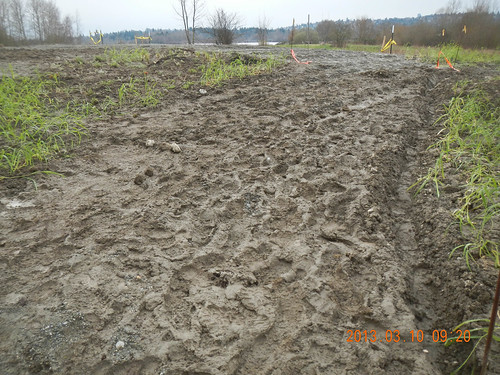 This is what we found. The groups on either side of our plot had already done their work.

The soil felt pretty low quality — very gravelly, a lot of silt and clay. It was also very difficult to work with. But still, we put the plants into the soil. 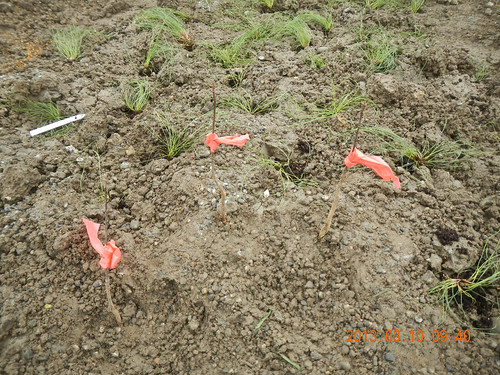 The work took a very short time for us, partly because we only had seeds. What we did for the most part was jab a shovel into the ground repeatedly, to break up the soil and create a large number of mini-trenches. Then we broadcast the seeds over the prepared area, and raked them over and stepped on them to get them into the ground. The last step was planting the starts of wild rye between the different plants. As we were finishing, a light rain was just beginning, perfect! And it stayed light enough not to bother the groups that were just getting started. It should be rainy for the next several days as well. (wotta surprise.) 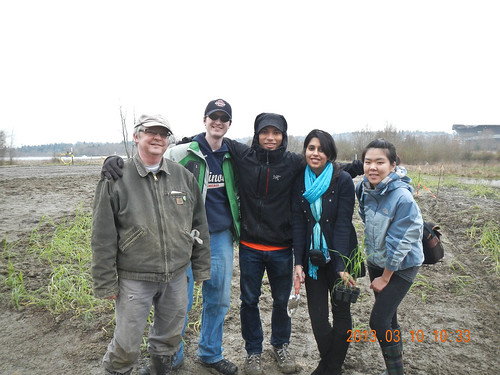 Group Five, the after picture. Left to right, me, Andy, Keenan, Tarranum, and Christine (photo by Andrew F., the TA).

All in all, it was a fun project, and I think we all worked well together.