It was pretty darn wet this morning, but at least it wasn’t cold. Five of us set out to do some survival rings on trees that desperately needed some help. As we walked down the trail, I tried what I remembered of the St. Crispin’s Day Speech. The bit about “those who lay warm in their beds” sounded entirely too tempting, so I stopped quickly.

Our goal was simple: put survival rings on some trail side trees on the south slope. The trees here desperately need it. There were four trees easily accessible, and we got them cleaned up in almost record time. Many of the trees that need work are in places inaccessible to volunteers — in some cases, just plain inaccessible. But these trees were very handy, with only a little brushing needed to get to work.

Here’s new volunteer Steve, posing beside a tree he cleared in record time. 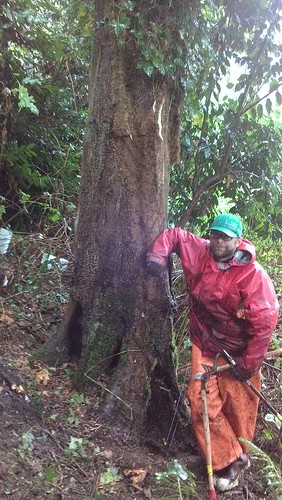 Some of the ivy had been on the trees so long the roots had formed mats that came away in big sheets. Other roots had made furrows in the tree as they inhibited its growth.

Here’s Tad at the tree he cleared. 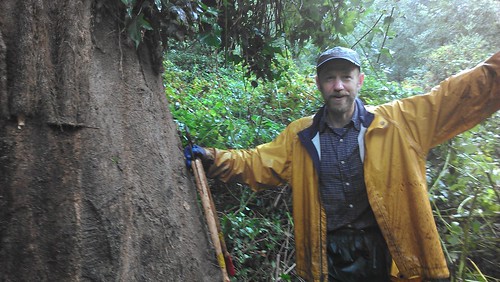 The stuff hanging down behind him is ivy that had reached the ground and rerooted. It would have broken off the branch it was dangling from in short order.

One of the last (“but not least”) things we did was get a tire in which a laurel tree had grown. 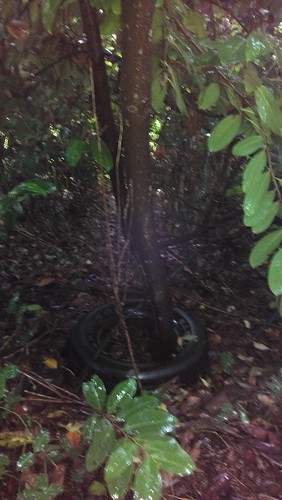 I’ve found this amusing since my early days exploring North Beach Park in 2008-9. I didn’t mourn its passing, though.

Usually work parties run for three hours, but since it was raining heavier by the minute, we were all bespattered, and had done the work we’d set out to do, we called it a day and headed out of the park. On our way out we found some more bottles’n'cans and took the opportunity to remove another tire.

All in all, a good, solid little work party.