The other day, Tad, Drexie, and I built what I hope will be an erosion control structure.

There’s been a seep eroding a section of one of the social trails for a couple years now. It’s been getting wider and taking a greater divot out of the trail. 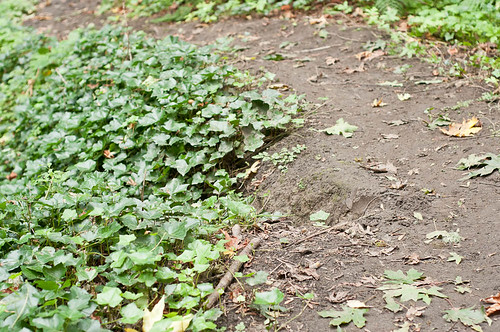 This photo is from September, 2011, almost exactly two years ago. The notch is wider now, but as usual I forgot to take a picture before we started working.

The structure we built is a cross between a live crib wall and a soft gabion, although nowhere near the scale of either of those links. We had a small failure, less than five feet wide at the base, and eight feet at its widest.

First, Tad cut points into the 2x4s that would become the uprights. We had eight 2x4s, four for uprights and four for braces. 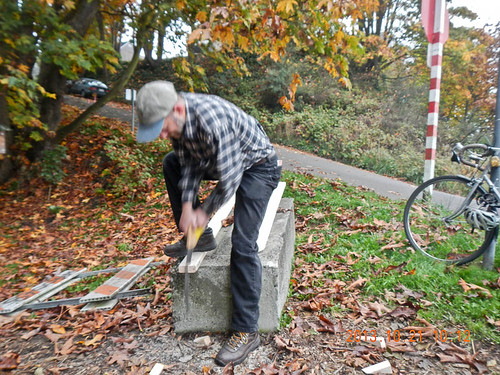 (Quite the sawhorse there, eh?)

On site, we cleared the seep and slope wall of ivy. 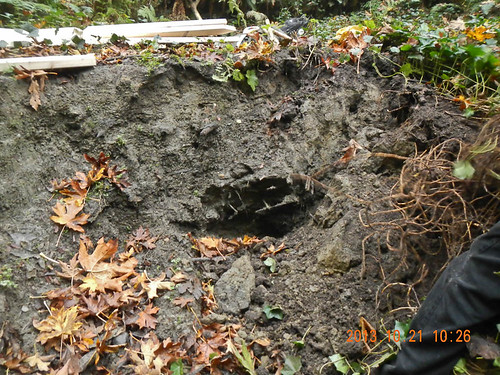 The soil in North Beach Park is very sandy. It’s slippery when wet and very friable when dry. It sits on glayed soil, which is compacted anaerobic sand. Water seeps through the sandy soil and then travels horizontally when it reaches the glayed soil. The water then acts as a lubricant between the two surfaces, gradually carrying away the soil above. The more I learn about the hydrology of North Beach Park, the more I realize that working with the hydrology will be an important part of the restoration. But I’m glad it’s been a gradual process; I still feel like I could be rushing in too fast.

We drove in the four stakes to be uprights. Then, in the tradition of all DIY projects everywhere, we immediately saw how we should have done it differently. For the braces, we measured the available space, then Tad (most often) cut a piece to length. 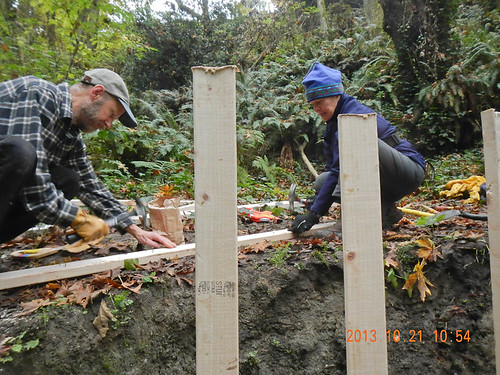 Tad and Drexie would start the nails, then hand down the brace to me. Sometimes I drove the nails, sometimes Drexie.

Once we had the cross braces nailed in, we began to fill the gap between the structure and seep with brush, using mostly downed branches broken or cut to fit. Finally, we cut salmonberry branches from elsewhere in the park and live staked them into the soil around the structure.

Here is a top view. 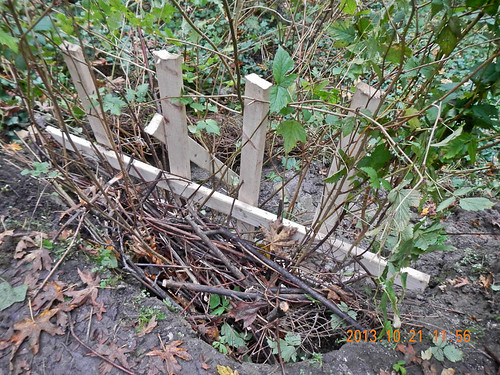 You can see both the brush used to fill and the live stakes.

We hope that the organic material and soil will be trapped by the brush, but the water will still be able to move through. The structure will stabilize the soil around it well enough for the live stakes to establish. Since live stakes, even with salmonberry, have a low establishment rate, we used a LOT (and could probably have used more). In November, we’ll install native wetland plants and shrubs around the seep and the wall.

Here is a front view, from down in the seep. 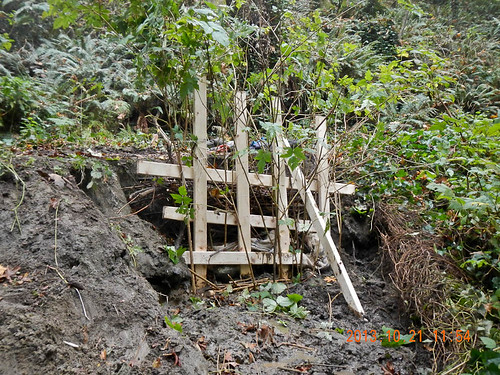