Two reports this week! Forgot to download the Monday pictures so here they are now.

On Monday we explored two habitat management units that are at the far northern end of the park, and consequently not very well explored. We also got a good estimate of canopy cover and of that what was conifer and what deciduous.

On the way there, though, we saw that someone had made a tasty snack of a tree planted last spring: 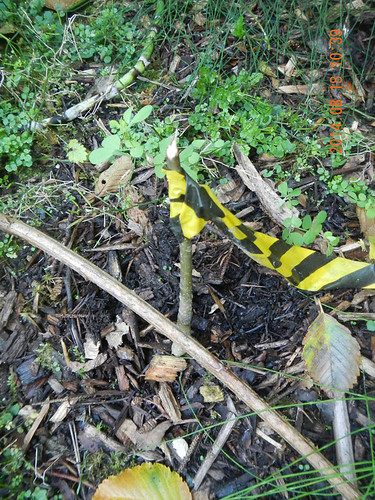 It’s the clean, angular cut that is a sign of mountain beaver (which don’t live on mountains and aren’t beavers). The other trees planted at the same time were doing well, so maybe it wasn’t that tasty after all.

The areas we were exploring were the 92nd St. Wetlands and Fletcher’s Slope, which you can see on the map below:

(Okay, that’s a little big, but the other size the software offered was too small.)

The green lines are the park boundaries, and the red lines are the HMU boundaries. The short, horizontal red line just below the center of the picture is a stream crossing. The social trail ends just north of there, but the park continues on for another couple hundred feet. That’s what we were exploring Monday. 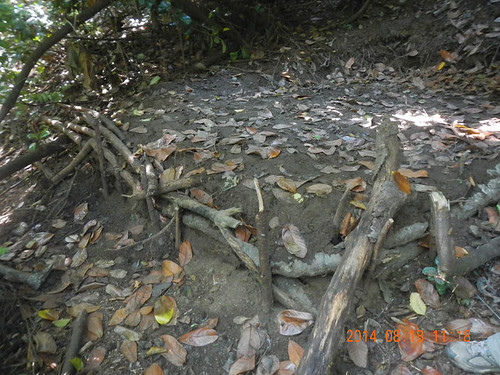 We saw this platform — what is it? Sleeping platform? Somebody’s home? Camping spot for kid’s sleep out? Whoever built it did a good job.

The reason for the exploration was to get some missing information for the MEH project and restoration management plan. We found out what we needed to know. But let’s skip ahead to Saturday because – 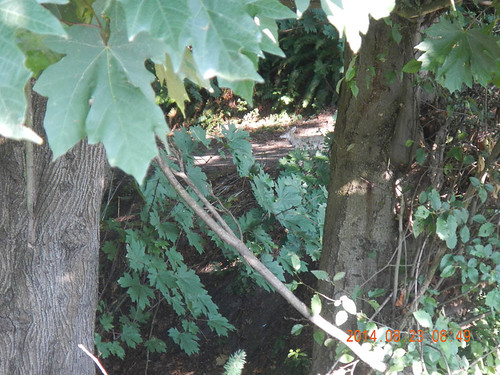 You can see it above, in the middle of the image, but quite a ways from me. Looking very intently into the park — “I just want to go home after a night of stealing cat food.” It very patiently waited while I took a couple pictures. Here’s the other one. 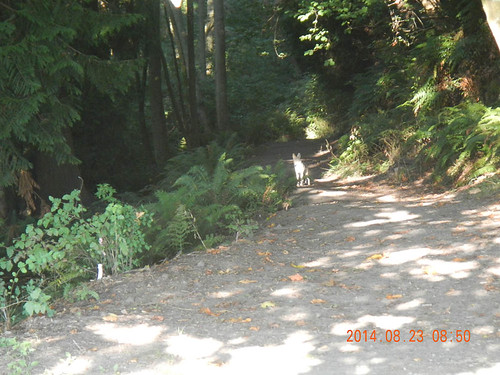 (I just realized I got so excited to post the coyote pictures I never processed them. Oh well.)

I was hoping to get one more, but looked down at the camera for a couple seconds and when I looked up, the coyote had vanished.

Really happy about that, I hope it eats some of the mountain beaver.

The work party today was just three people — “The few, the proud… or at least the few,” as Morry said. August work parties are usually our least-attended. If it’s good weather, everybody wants to get out of town because OMG SUMMER’S ALMOST OVER. If it’s bad weather, they want to sit inside and sulk because a possible good weekend is wasted.

In any case, we got some good work done. We revisited an area that had been cleared of a blackberry monoculture in the winter. Well, really clearing the blackberry monoculture and then letter everything sit for a couple months sharply increased the diversity. Unfortunately, it was all invasives or undesired native plants. But we worked among the weeds and brought down four wheelbarrows of mulch, so we did some good.

Here is an “after” picture: 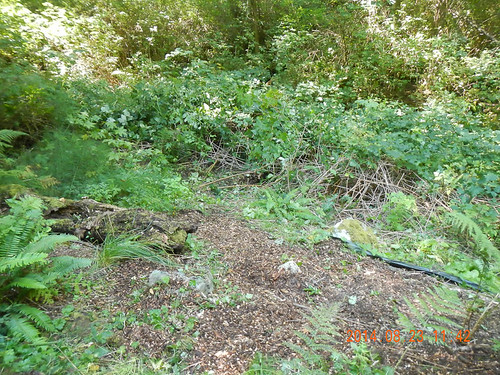 The next work party will by Saturday, September 27. It’s at a different location, the South Plateau, and a different time, 10 a.m. to 3 p.m. We’ll be joined by students from Seattle Pacific University on their CityQuest program. Hope you can join us!