Saturday, September 27th was a beautiful day for a work party — and a good time was had by all!

Friends of North Beach park welcomed 16 students from Seattle Pacific University as part of their Cityquest program: Incoming freshman students are sent to locations all over Seattle for a little community service.

Two forest stewards had made elaborate plans for the group, and we were able to keep them busy for all four hours of the work party (FoNBP events are usually three hours). We worked on the South Plateau, which is a great place for a larger work party and needs a lot of attention.

Our plan was to remove as much of the nipplewort (Lapsana communis) and herb robert (Geranium robertianum) as possible. It really got out of hand this year, and unfortunately, the nipplewort had already set seed. It’s normally very easy to remove — it’s a shallow-rooted annual, so just grasp at the base, lift, knock off the dirt, and drop it. But the seed set meant we had to remove it. I’m sure a lot of seeds got knocked off in the process, but it was still better than leaving it there. The herb robert is also easy to remove, but it needs constant attention. It can flower any time of the year, greatly outcompetes native groundcover, and even poisons the soil against other plants. It’s other common name is “stinky bob,” and it has a pungent smell when uprooted.

Our plan was to put down lots of burlap and mulch once the herb robert and nipplewort had been removed. To which end, we had a truck full of burlap. 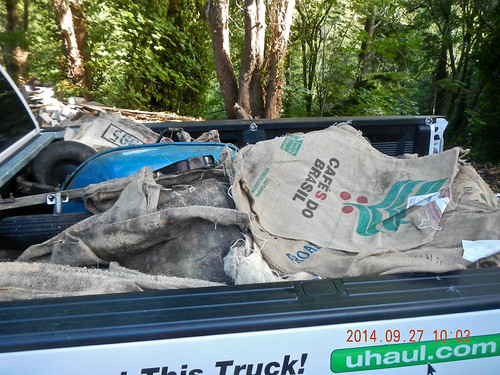 And a big pile of burlap and a lotta buckets! 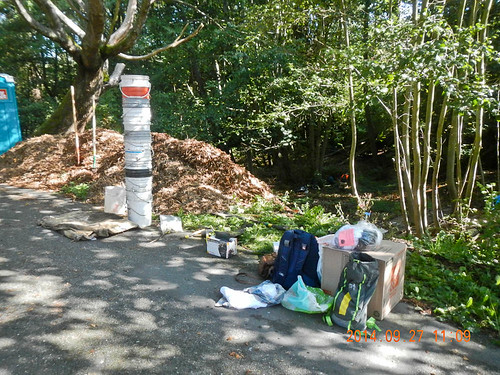 In fact, about lunchtime we went back and got more burlap. And we had a group of students moving mulch from another location, adding it to the pile above pretty much all day (okay, we fell a little short on the wheelbarrows).

Speaking of lunchtime, it gave us all a chance to sit down and for the students to get acquainted with each other a bit. 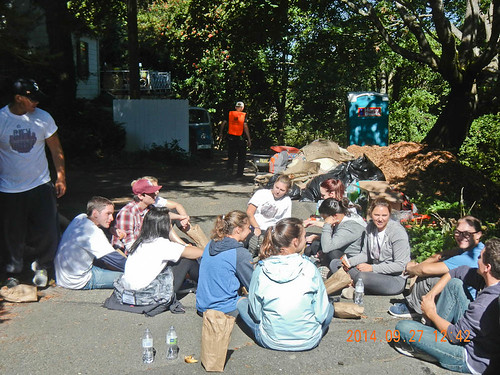 After lunch, it was back to the work: removing nipplewort and herb robert, putting mulch around already-installed plants, and building some ivy platforms.

Here is a group of volunteers in the basin of the South Plateau. When residents of Labateyah began working in the South Plateau in 2012, this was an impenetrable mass of blackberry and ivy that one forest steward thought it would take years to clear. 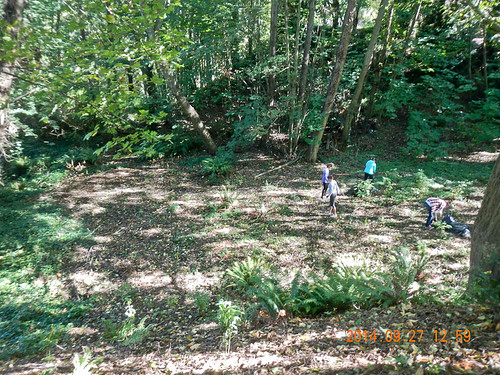 By the end of the day, we were definitely dragging. But we had enough energy to smile for a group photograph. 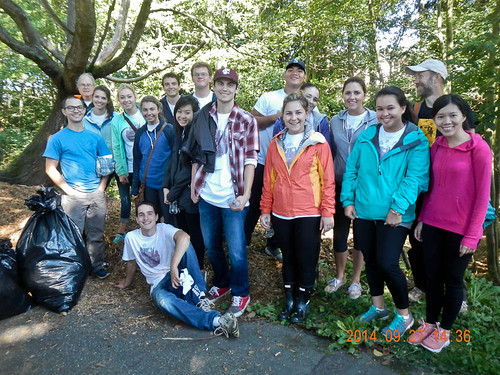 Morry (in the back left), Tad (on the right, in a white hat) and Wenny (first row right, in the fuschia hoodie) were from Friends of North Beach Park. Everyone else is form SPU!

Thank you, SPU and Cityquest! We look forward to hosting you again next year.

(As usual, there are some more photos on Flickr.)