This is a repost from 2007, but what the heck. I'm going through my LJ photos for the bird class at school and moving them to Flickr. 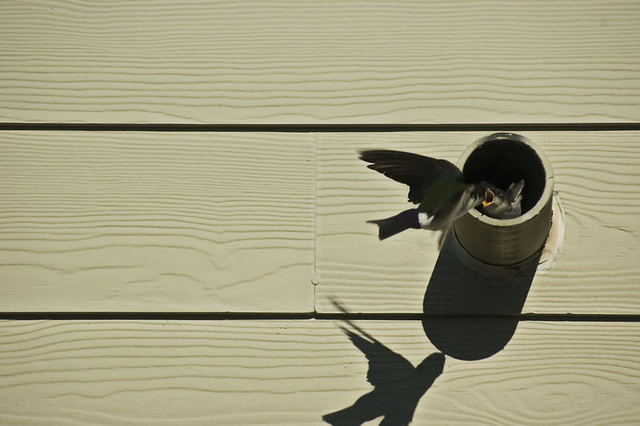 For the two summers we lived in Fremont, a pair of tree swallows set up a nest in a pipe. The pipe happened to be across from our kitchen window. We were able to watch the pair nest, the female brood, and then both adults feed the young.

We never saw the young leave the nest, they just disappeared one day.

I took this by setting up my camera on a tripod and getting focus and exposure set. The bird flew by every ten minutes or so, and the nestlings gave a warning by getting more agitated as the parent approached. The camera was set to burst, so it would capture a few frames.

If you search on "tree swallow swarm" on YouTube, you can find several videos of varying quality of flocks preparing for night roosts in their winter feeding grounds. Here's one.
Collapse