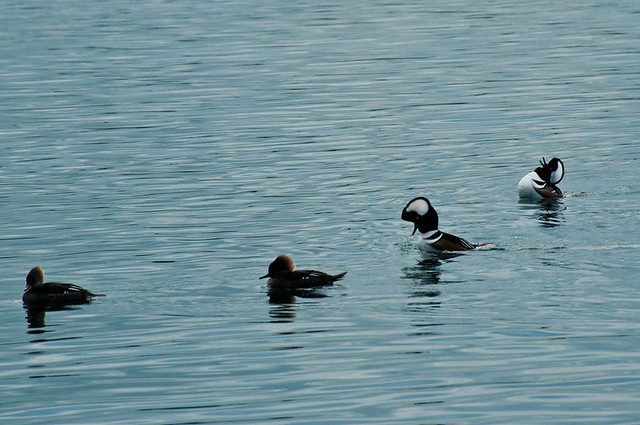 Condor: To the Brink and Back -- the Life and Times of One Giant Bird
by John Nielsen
2006, Harper Collins

The California condor has lived in North America since the Pleistocene. In the days of the mammoth and mastodon, its range extended over all of North America.

It's a carrion feeder, and like all carrion eaters, it's far from what a human would consider "pretty," but it's as well-evolved as anything that has been around as long as it has. For example, it cools itself off by pissing on its legs. I'm glad I can cool off using a different method, but the arteries of the condor close to the skin there are more than adequately cooled by the evaporation of the piss.

Since the death of the megafauna, the condor's range and numbers have been dwindling. By the 19th century, its range was the mountains of central and southern California. When Europeans arrived, its numbers plummeted. Many were shot by ranchers and farmers, mistakenly thinking that the condor killed their livestock (it ate dead livestock, of course, but didn't kill for food). Many were also shot in the name of "shotgun ornithology", where the skins would be prepared for museum displays. Another source of lowered population was the late 19th century fad for collecting bird eggs.

By the late 1980s, there were fewer than twenty condors left in the wild. That's when the federal government decided to take a strongly hands-on approach, capture the last wild condors, and institute zoo-based breeding programs.

A hands-on (capturing the wild condors, captive breeding programs) vs. hands-off (observation, protection of habitat) conservation approach had been the subject of acrimonious debate for decades, beginning before WWII and increasing in bitterness as time went by. By the time the captive breeding program was certified, the fighting destroyed working relationships that had lasted decades.

It's very likely that the hands-off approach would have resulted in the extinction of the condor. There just wasn't a genetically viable population left in the wild, and the low breeding rate (one egg every two years) and relatively high mortality rate (from lead poisoning and poaching) would have wiped them out by the late 90s, if not sooner.

But the question now is: Are the reintroduced condors truly wild? The first reintroduced condors were adolescents that had little or no experience with adult condors. They'd been hand raised by humans using condor hand puppets and one-way mirrors. They were too associated with humans, and would even land on human houses that had good views. They didn't know to avoid power lines, and would frequently fly or glide into them.

Birds released later were trained to avoid humans and power lines. And their behavior was helped by rereleasing some adult condors (condors can live up to 50 years in the wild). Eventually, there were some fledglings hatched.

They still have to be fed at feeding stations, with stillborn calves from nearby dairy farms. Some of the first reintroduced condors were killed or sickened in what was practically a lead-poisoning epidemic, as they ate the lead shot in abandoned deer or elk carcasses. They had to be recaptured, chelated, and rereleased. Eventually, lead bullets and shot were banned from condor protection areas.

If you read contemporary nature writing (which I seem to be in a binge on), sooner or later the author gets onto the subject of how bad a job we are doing at managing our planet. I picked up this book thinking, well, here's something that will cheer me up, here's something good we're doing. Holy cow, was that ever a misestimation.

It's not resolved whether the condor is viable on its own, even now. It's a relict species (i.e., once abundant, now rare), not a keystone species (as the spotted owl is). Science hasn't treated this bird any better than farmers. I was just as horrified by the aversion-training of soon-to-be-released condors as I was by the 19th century shotgot ornithology. I have no idea whether this effort has been worth it.
Collapse