Last Saturday (7/13) was another EarthCorps event at North Beach Park. This one featured ivy removal on a slope at the Headwaters Bowl. The previous work party had about 50 people signed up, but the summer work parties have much smaller attendance. This time, we had about 16 people altogether. This was exactly enough people for the spaces we were working in and the work we had to do.

Tools ready for use 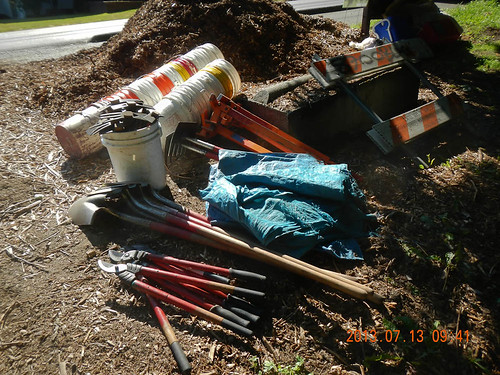 When EarthCorps arrives on site, they set up a couple shade structures and tables, and they set out the tools expected for the day. (They also provide a porta potty and bring a big bag of energy bars. All helpful!)

Now we have a few “before” pictures: 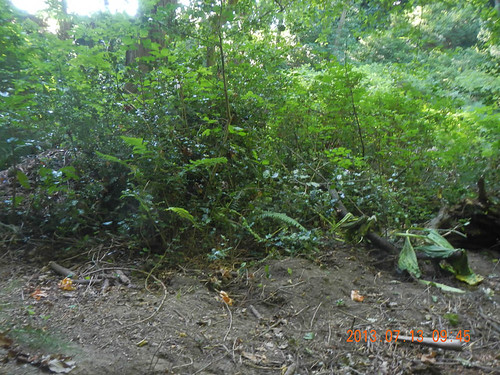 About five people (altogether) worked throughout the day on pulling up this holly thicket. 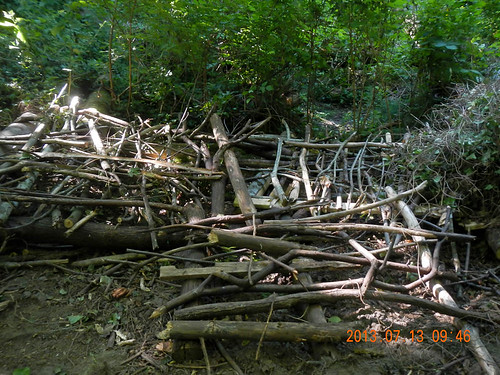 Friends of North Beach Park built this ivy platform in June; we thought that it would last a couple work parties. Not only did one EarthCorps work party completely fill it, but they had to build two more platforms, one for the holly and one for more ivy. 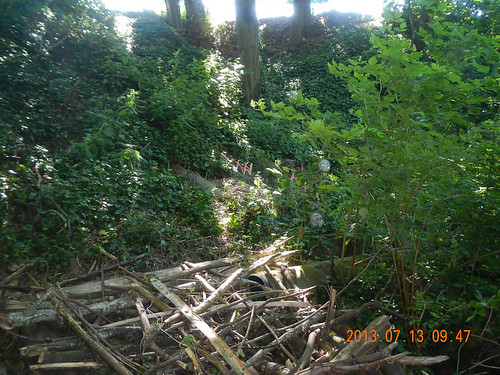 This is a partial view of the ivy removal work area. The slope was pretty much an ivy monoculture. 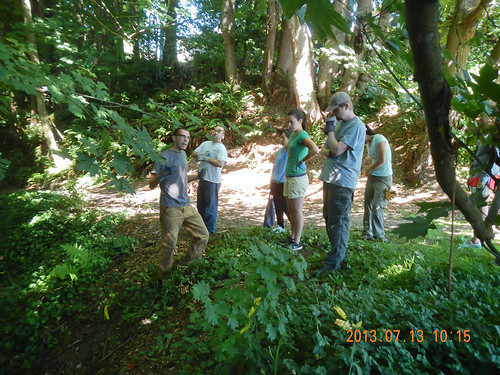 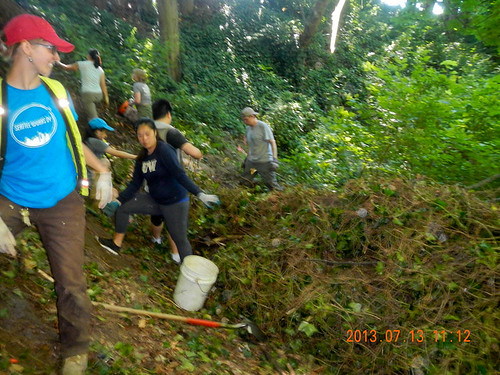 After about an hour of work, the platform was almost filled. Masha (from EarthCorps) in foreground. 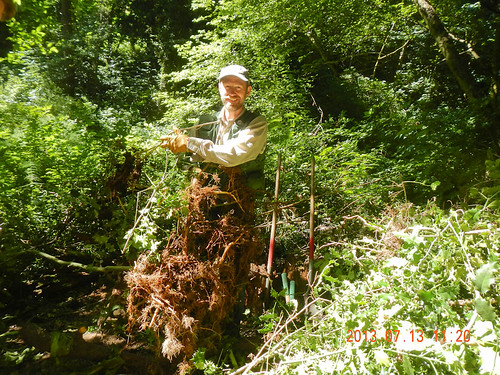 Tad holds up a holly root. It’s that large brown mass in front of him. 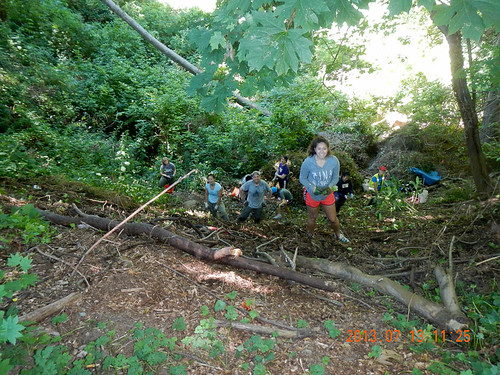 The morning slope crew poses for a quick snapshot. You can begin to see how much they’ve cleared already, about about 90 minutes of work. 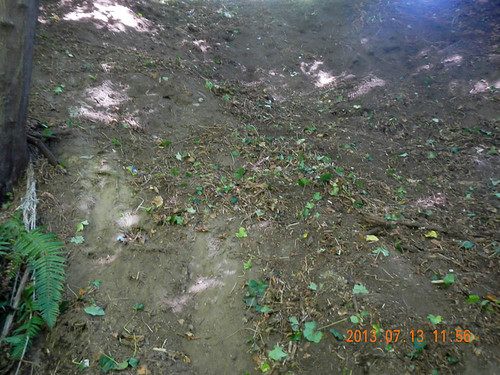 The bare slope in this picture was covered in ivy just a short while before. The ivy still visible is just scraps.

For the afternoon, we basically split into three crews. One worked on putting burlap down on the exposed slope, another worked on more ivy removal, and the third returned to the holly thicket. 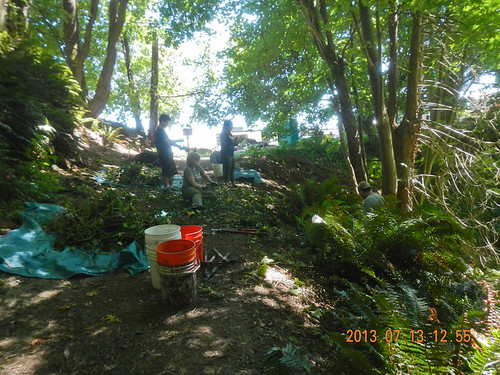 The afternoon removal crew worked in an area that had ivy and sword fern mixed. 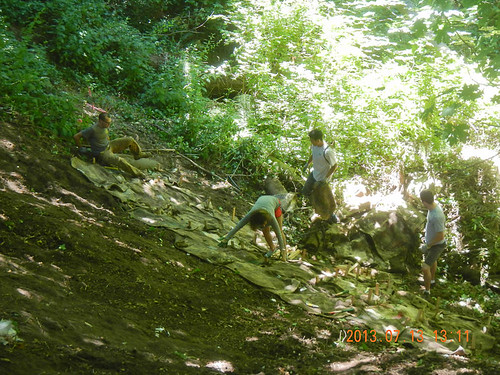 Even though it’s burlap, it’s still considered mulch. We used up the burlap that was on site, and for the next work party (in September) we will finish covering the slope with burlap and then add some wood chips on top. This will both suppress ivy resurgence and keep the soil moist.

And now a few “after” pictures, taken after the work party was over.

The slope with burlap 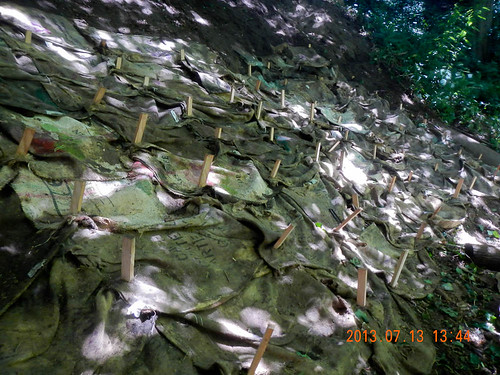 Since we only had a little burlap, we only did one layer. On other slopes, we’ve done two layers. Even so, there’s enough overlap that there are some areas with two or three layers of burlap. The stakes hold the burlap in place and provide footing as you work up the slope. Starting at the bottom allows you to overlay the burlap like roof shingles. Overall, this will slow down (if not stop) the water to allow it to soak in, rather than just run off. 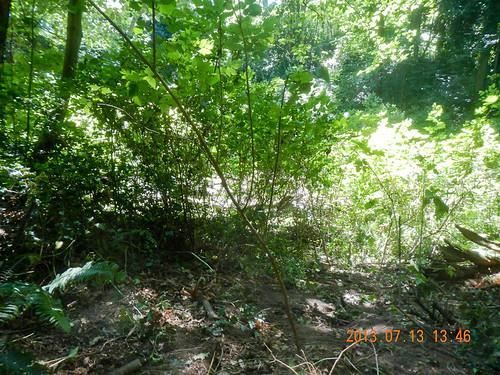 This is the holly thicket, much reduced. Although there is still a lot to do, and we’ll have to keep an eye on this site for a while. Holly can resprout from even tiny root fragments. But they’ll be easy to pull. 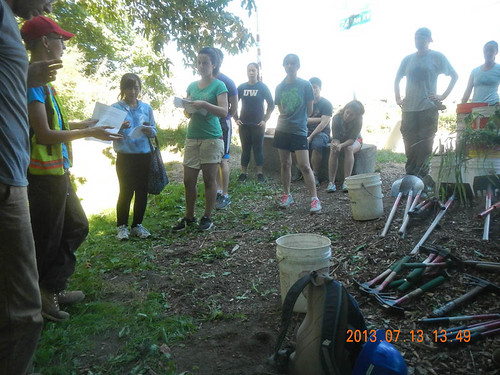 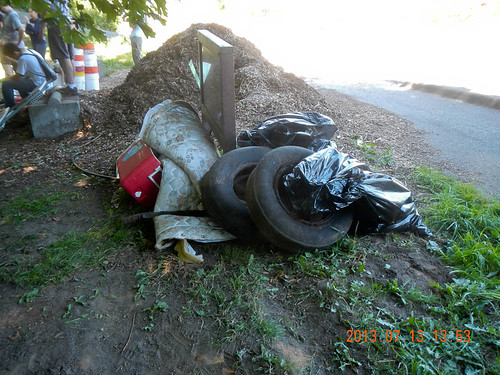 And last but not least, the trash haul this time: Three tires, a couple coolers, torn-up mattress, and three contractor bags of bottles’n'cans. Not spectacular, but about average.

Also in the park that day was a film crew for the 48 Hour Film Project, Team Bad Elephant. I didn’t get to see what they were doing, but it was fun to have another group in the park doing something completely unrelated to what we were.

The remaining EarthCorps work parties are on these days. All events meet at the main entrance to the park, 90th St. and 24th Ave NW., and all events are from 10 a.m. to 2 p.m. Go here to sign up. As of this writing, they’re not posted yet.